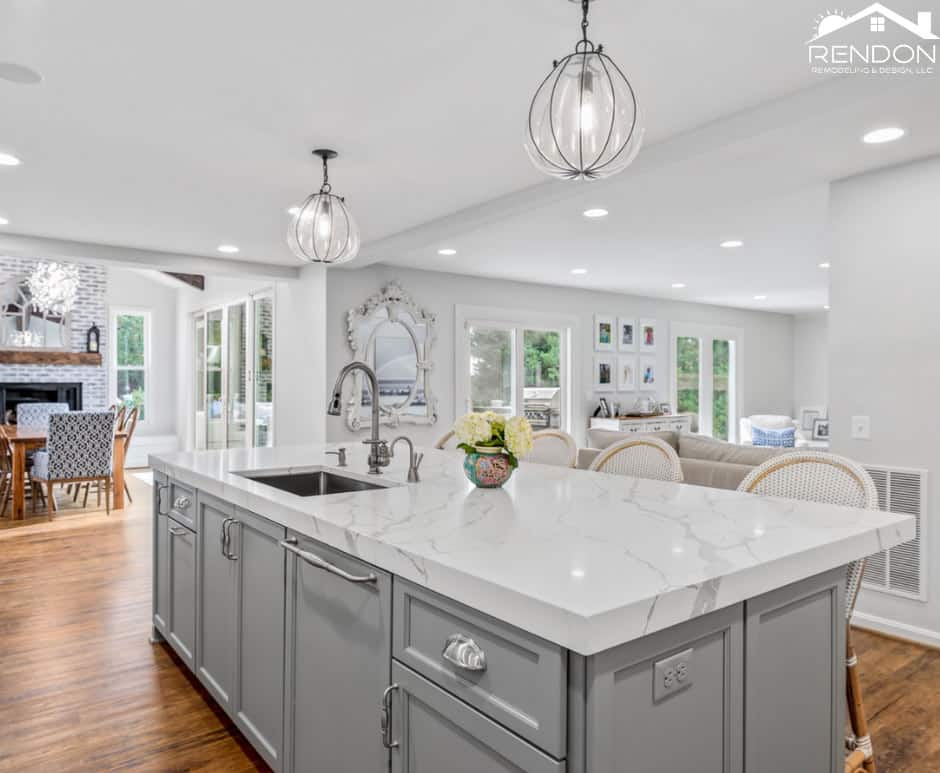 Nothing makes us happier than repeat customers here at Rendon Remodeling!  This is our second remodel with this family.  We previously relocated the laundry room and created a mudroom as our first project. 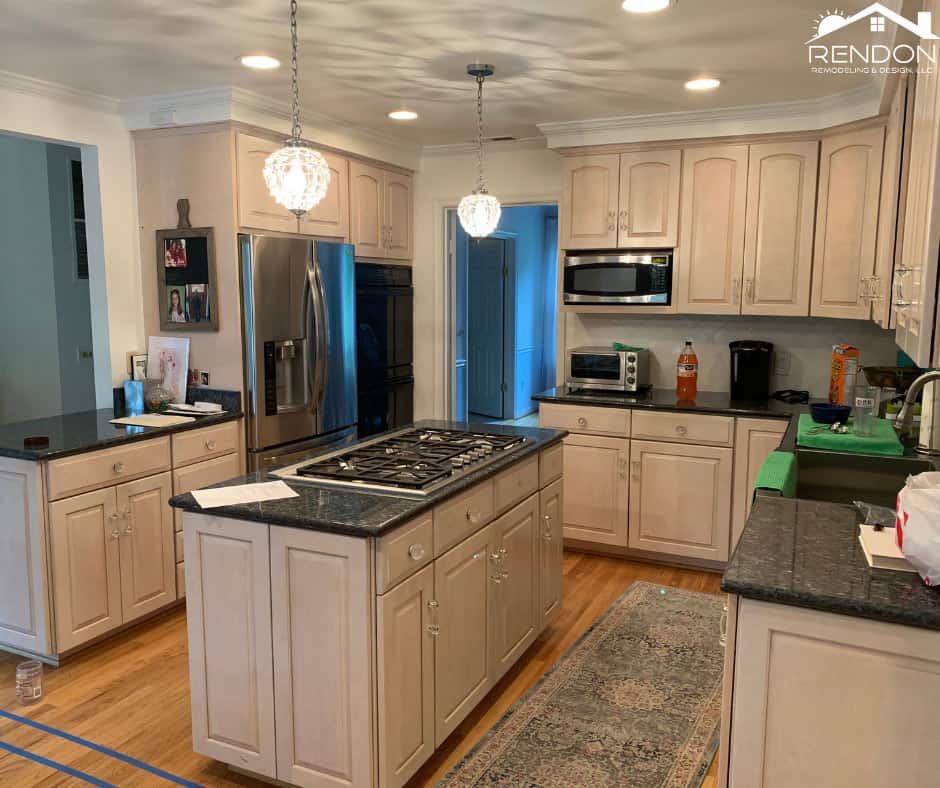 This was a 1970s home to a personal chef and her family, who love to entertain and host large gatherings. The small kitchen and separate formal dining room were inadequate for their needs and offered limited options for work or entertaining.

The goal was to work within the existing footprint of the house.  After discussing many design options, we decided it made the most sense to add a completely new dining space and enlarge the kitchen using space from the previous formal dining room, which then became a small den off the foyer. 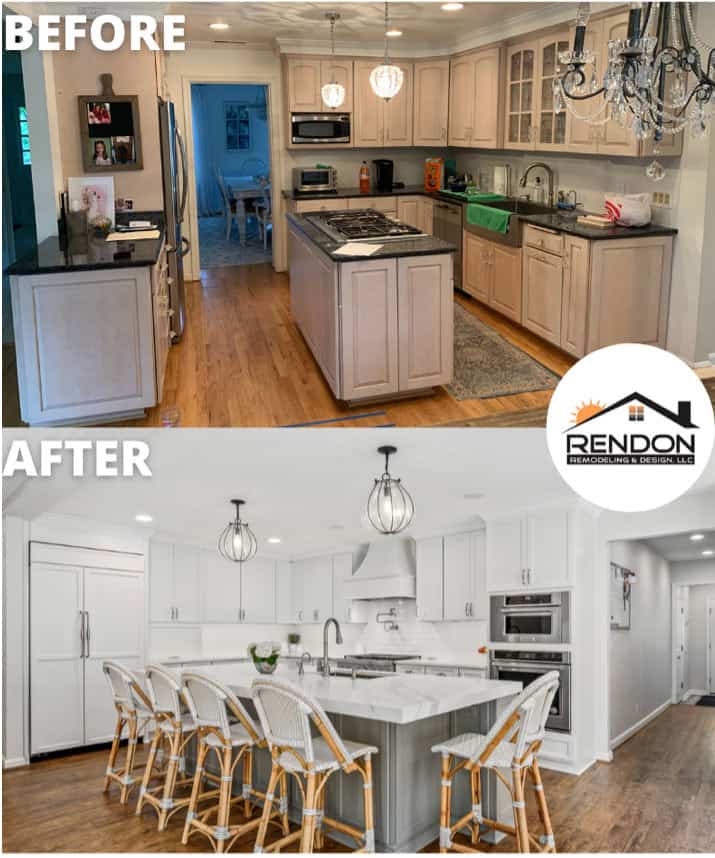 The enlarged kitchen features a long island with ample seating, a large sink with an in-line water filtration feature, and a built-up luxury quartz countertop.  The former kitchen had minimal prep space, no room for friends to gather, and a very small nook for a table and chairs. The homeowner desired a much larger kitchen which was more open to the other rooms, would function well for professional cooking for work, as well as allow space for friends and family to congregate. They also wanted informal dining with a table that would fit up to ten people.

The overall design scheme is light, bright, warm, and inviting, with a paneled refrigerator and dishwasher, and professional-style six burner stove with a pot filler. The hues are white and soft gray, with a classic subway backsplash using white beveled 3×6 tiles. An adjacent bar area features a beverage center and decorative glass. 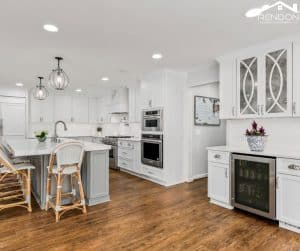 The addition includes a volume ceiling with a decorative beam detail, a new white-washed fireplace, and large sliding glass doors opening onto a new deck. The addition offers ample space for entertaining with easy access to the deck during the warmer months. 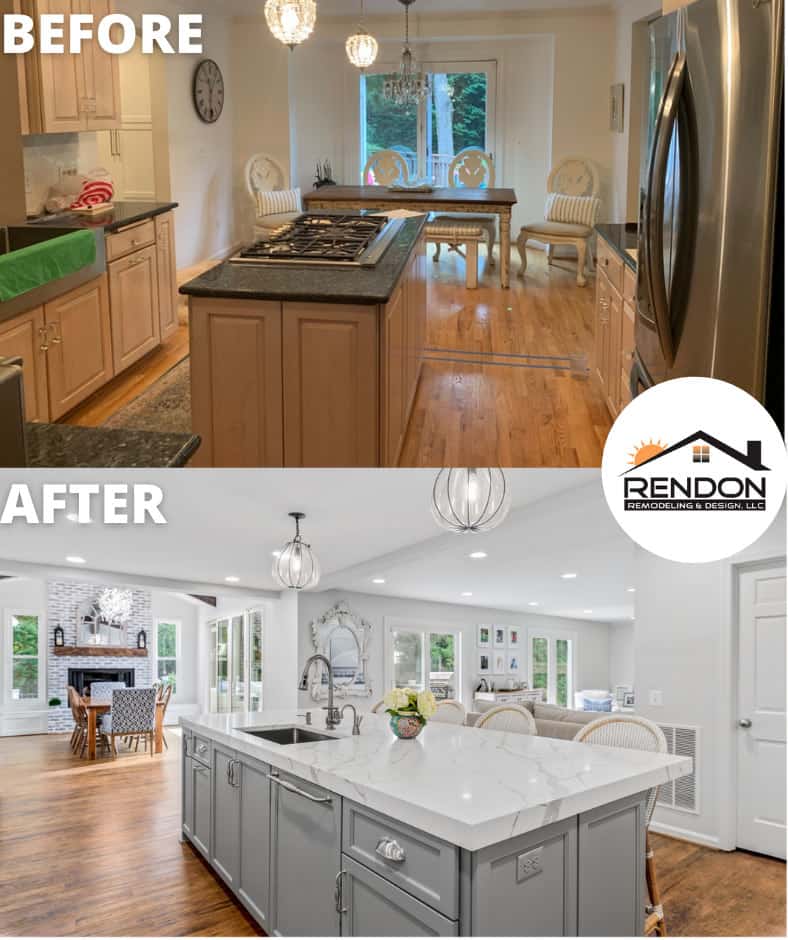 What began as a small kitchen and a separate forming dining room turned into a spacious kitchen with more than enough space for both cooking and entertaining—exactly as the homeowner desired!  This project was done in two phases, completing the kitchen first so that the homeowner had complete use of it during the second phase, which was the addition of the new dining area. New LVP flooring was installed throughout the entire first floor of the home.